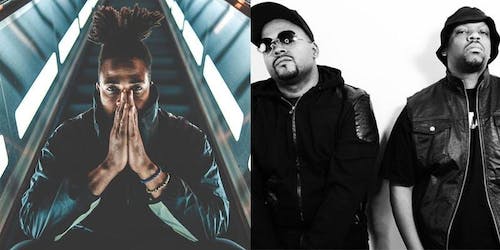 Since the release of the debut album, Mind Over Matter in 2000, Zion I has risen up the ranks of independent hip-hop to solidify their standing as one of the most prolific conscious rap groups of the past 2 decades. Boasting a catalog that consists of over two-dozen albums, EPs, mixtapes and collaborations, Zion I (currently consisting solely of MC/producer Zumbi) continues to create inspired music influenced by social & political woes, personal challenges & triumphs as well as family, spirituality and a raw perspective on the world at large.

Cited by A.V. Club as “remarkable”, Zumbi continues to showcase his talents as a unique, diverse and skilled MC while maintaining his place as one of the most recognizable voices in Hip-Hop. The 2016 release, The Labyrinth was cited by PopMatters as “a timely new album of politically engaged hip-hop”. Fueled by his own personal losses as well as the current political and social climate of the world-at-large, Zumbi has created a record that, as the Huffington Post put it; “is as heartfelt as it is badass”.

Being one of the most energetic and engaging live acts out there, Zion I continues to bring the music to the masses at festivals, events and venues across the planet. With a sound and style that bends musical genres, Zion I is able to perform alongside a diverse range of artists ranging from rap, rock and reggae to jam band and EDM.

With the latest release of Ritual Mystik, Zion I continues to make music that while left-of-center is still relevant, fresh and exciting as ever. As Okayplayer put it; “At the end of the day, Zion I’s strength lies in the same areas where many artists falter – evolving without abandoning tried and tested methods.”

Chances are, if you are anywhere near the Detroit music scene, you have heard of the influential hip hop trio that makes up Slum Village. The group was founded in the early 90′s by 3 childhood friends: Baatin, T3, rapper and producer J Dilla, who all grew up together in the Conant Gardens neighborhood of Detroit, MI. After leaving Pershing High School, the trio began to forge a path into the Detroit underground hip hop scene and quickly found themselves steadily gaining popularity, where they originally went by the name Ssenepod.

With a growing momentum now cemented in the underground, the group took on a forward trajectory toward bigger and better things, and in 1991 changed their name to Slum Village. J Dilla joined the production team known as The Ummah, which produced the two last A Tribe Called Quest studio albums, as well as hits for a number of R&B and hip hop musicians, and in 1996, they recorded their first album Vol. 1″ , recorded in Dillas basement and RJ Rice Studios, it was critically acclaimed in the Detroit underground scene. It later found its way into the hands of A Tribe Called Quest’s own Q-Tip, who played it for some of hip hop’s elite, such as Busta Rhymes, Questlove, and D’angelo. This fruitful alliance led to an opening gig for A Tribe Called Quest on their Farewell tour in 1998.

Slum Village landed their first record deal in 1998 with Barak/AM records. Due to label politics, the group was forced to release their album “Best Kept Secret” under the alias J-88,. Their now classic record, “Fantastic, Vol. 2″ was also in production, but was not officially released until 2000 through Barak/GoodVibe Records. “Fantastic Vol. 2″ was dubbed an immediate classic from fans and industry tastemakers. This album featured an A list line up including Busta Rhymes, Common, D’angelo, Jazzy Jeff, Pete Rock, Kurupt, and Q-Tip who passed the torch to Slum Village on the record “Hold Tight”. On the heels of this record release followed a tour with The Roots on the Okay Players tour/D’angelo Voodoo tour.

In 2001, while sitting down to discuss future plans, J Dilla made the decision to leave the group to pursue his solo career, citing the group was well established enough to move on without him. With J Dilla still around helping Young RJ with production, Baatin and T3 started work on their next album “Trinity” through Barak/Capital Records, featuring Elzhi on 6 of the tracks. This album would feature their first commercial single “Tainted” which ft an unknown Dwele, also disco and the remix produced by Timberland. Slum was presented with their headlining opportunity on the Family Tree tour, featuring Phife from A Tribe Called Quest.

In 2002, Dirty District, a compilation of songs by Detroit rappers largely produced by T3 and Young RJ, was released. The group then became a duo consisting of T3 and Elzhi, Baatin became sick touring shortly before the release of their 2004 album, Detroit Deli (A Taste of Detroit) and departed to seek treatment. The album included the hit single, “Selfish”, produced by Kanye West and featuring John Legend. The song samples a part of the intro to the hit song “Call Me” by Aretha Franklin. After parting ways with Capitol Records in 2005, they released Prequel to a Classic, a mixtape of mostly previously unreleased material, Slum went back into the studio to record the self-titled album Slum Village, with production from Young RJ and Black Milk. Following the album’s release, they went on tour with Shady Aftermath group, D12.

Tragedy struck in 2006 in the form of the loss of founding member J Dilla, to lupus, which put the group on a 4 year hiatus. In 2009, T3 reunited Baatin with the group, brought in Illa J (of Yancey Boys fame and J Dilla’s brother), and along with Young RJ, RJ Rice and Elzhi, started production on their next album, Villa Manifesto. Slum Village went back on the road as a trio including Baatin. Later in 2009 , Slum village performed at Rock the Bells as a trio consisting of T3 , Elzhi and Baatin, with the latter still coping with bipolar schizophrenia making him unable to travel when the tour continued into Canada that year. While T3 and Elzhi performed the Canadian shows, tragedy struck for a second time, claiming Baatin that summer at home in Detroit, his death was felt deeply throughout the Detroit Hip Hop scene.

In 2010, the album “Villa Manifesto” was released under Ne’astra/Koch Records, featuring the late Baatin. By that time Elzhi had decided to move on and focus on pursuing his own solo career. Even though the group has suffered many heartaches and member changes, Slum Village always finds a way to reinvent themselves. At present, the evolution of Slum Village continues with a reinvigorated energy, with founding member T3 holding down the legacy , and grammy nominated producer Young RJ and Illa j, the young prodigy at his side. Slum Village has a new mixtape “Dirty Slums”, presented by DJ Mick Boogie, featuring artists such as Big Sean, Rapper Big Pooh, De La Soul, Focus, Skyzoo, Phonte, and Phife,after 100,000+downloads and rave reviews, the group released an official full length album and are planning on a sequel …As the industry changes, so has Slum Village, and yet and still while some think SV may have crashed and burned, they just keep coming up like the rising phoenix.